2013, School, Victoria Eveleigh, World book week, 1
World Book Day 2013 was on Thursday March 7th, but many schools celebrate for the entire week, and this year, so did I!

I’d been invited to Pilton Community College in Barnstaple on the Tuesday to teach three classes and also take part in officially opening the newly refurbished library.  I was very honoured and excited to be part of something so  special.  I’d arranged to travel down the day before and stay with a lovely author by the name of Victoria Eveleigh, known to her friends as Tortie, but to me as Tottie (due to meeting her at a very noisy Orion publishing party and mis-hearing her name!).  She writes wonderful pony books for pre-teens, and with her husband and daughter, runs a farm on Exmoor. 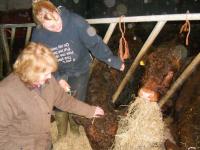 We had a slightly traumatic evening; after arriving later than expected and discovering that Tottie had arranged a dinner party for ten (complete with pink fizz!), one of the dogs was taken ill.  Guests arrived, the delicious meal was served in the ancient farmhouse with huge fire blazing and the champers flowing freely – but poor Beetle was very poorly.  The vet eventually diagnosed alcoholic poisoning – silly dog had discovered some vodka-soaked strawberries on the midden and gulped them down! 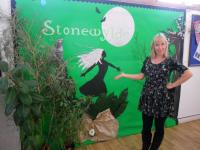 The next morning I was up bright and early and left for Pilton Community College.  Lyn and Trish, the librarians, had put an enormous amount of work into preparing for this special day.  Trish had decorated the library as Stonewylde, with hares, barn owls, a Green Man and the Wheel of the Year!  It was very beautiful and as I walked in, I was moved to tears to see what a beautiful tribute she’d paid to my books. 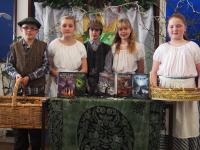 Lyn had organised the whole event so well, and after teaching two classes, it was time to officially open the library.  The local press were there and some of the younger children had dressed up as Villagers from Stonewylde, and served everyone with hot cross buns. And the Green Man himself turned up – it was amazing!

I spoke to one more class of Year 9 pupils, and after lunch with Lyn and Trish and a good chat about Stonewylde (they’re both ardent fans) it was time to say goodbye.  I really was overwhelmed by the amount of work that they’d both put in to arranging this special day, and I hope very much to return to the school again in the future.  Thank you, ladies! 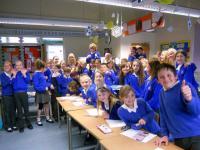 I drove across the border into Dorset, and the next day I visited St Andrew’s Primary School in Weymouth.  This was a very special visit as I used to teach at this school, and my three sons had all spent many happy years there.  Karen Hick, one of the teachers (and a Stonewylde reader herself) had asked if I’d visit during World 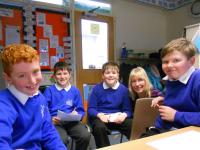 Book Week to talk to the older children about writing and being an author, so I spent a wonderful afternoon in my dear old classroom speaking to first Year 6, and then Year 5.

The children were absolutely brilliant; having taught older pupils recently, I’d forgotten the sheer exuberance and excitement of ten and eleven year olds.  They were wildly enthusiastic and worked so hard, and I really enjoyed my visit so much.  I promised to return when I’d written my book for 9-12 year olds, which is one of my next projects. 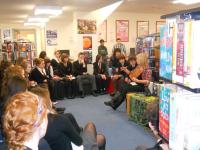 The next day was World Book Day itself!  I spent the whole morning at the Thomas Hardye School in Dorchester, where my three boys had attended.  This is a really fantastic school and I’d been delighted when Maddi Heinrich from the school library and Sylvia Russell from the English Department had arranged for me to visit.  Maddi and Sue, the librarians, had also put a huge effort into making the event a success.  I spoke to three groups of Year 9 students in the Talented and Gifted stream, and was a little concerned as they were all so amazingly quiet!

They sat, completely silent, as I spoke to them of my writing experiences, creating Stonewylde, and the incident that took place in their very school which had been woven into the second book in the series.  Several Sixth Form students also listened to my talk and took part in the workshop, and it was lovely to see some familiar faces from previous book-launches in Dorchester.  Great to see you again, Rob and Millie! 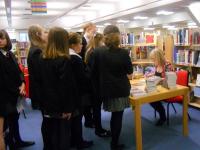 There were queues at break-time as I signed copies of Stonewylde, and I didn’t have time to do justice to the lovely cup-cakes that Sue had been kind enough to bake for me.  The enormous library at the Thomas Hardye School would put many public libraries to shame. After a final session with another group, Maddi, Sue and I enjoyed a delicious lunch made by them both, and I loaded up my things for a mad dash across Dorchester to St Osmund’s Middle School and my final visit of the week.

It was such a rush to quickly don my outfit in the loo as half of Year 7 (around 75 pupils) filed into the Art Room with their teachers and teaching assistants in tow.  I was running late and began my talk whilst still setting up my table.  Again, the group were fantastic, listening intently as I spoke to them of hares and labyrinths, of bloody noses and following your dream.  My lovely sister, Joy Laver, who works at this school had helped me set up my books in the library, and whilst the pupils worked on their maps, I signed copies of Stonewylde for many pupils in a variety of fancy dress.  Sadly we ran out of badges, though everyone had a bookmark to keep.  Karen Ryan, the teacher who’d arranged the visit,  was dressed as a Very Hungry Caterpillar and had incredible green eyelashes.  She bought the last book, Shaman of Stonewylde (she started the series last year when I visited), and is now engrossed again! 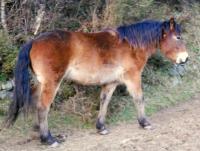 I arrived home late on Thursday night, exhausted but very happy indeed.  It’s been the most wonderful week ever!  All four schools – Pilton Community College, St Andrew’s, Thomas Hardye’s and St Osmund’s – made me feel so welcome.  Every single pupil I encountered during the week was polite, friendly and very engaged during my talks.  I met with such enthusiasm and warmth, and I really can’t thank all the adults and all the children who made World Book Week 2013 so special for me.  Oh – and Tottie’s dog has now recovered from his drinking binge and is fully recovered!  Here’s a pic of one of her very beautiful Exmoor ponies, Orion Star, to finish this blog.