We’ve just spent an amazing time in Glastonbury!  First there was a book signing event in the Cat and Cauldron, an Aladdin’s Cave of witchy goods.  I’d met the proprietors, Trevor Jones and Liz Williams, ages ago when I was interviewed for Radio Glastonbury, and they were kind enough to host this event for me to coincide with the Avalon Faerie Ball.  We’d hoped to get to Glastonbury nice and early and give ourselves plenty of time to spend in the Faerie Market.

Linda Ravenscroft is one of the many talented artists who were at the market.  We met Linda several years ago at the Elf Fantasy Fair in the Netherlands, where we had a stall selling Stonewylde books and cards, and we’ve bumped into her many times since.  It was lovely to see her again in Glastonbury, although sadly we only had ten minutes to spare in the market.  The drive down had been horrendously slow and we’d failed to anticipate all the half-term traffic heading west.
The Cat and Cauldron were well organised and had ordered in plenty of copies of Shaman of Stonewylde.  We brought along some ceremony cakes, badges and bookmarks, and before long, the shop was filling up! 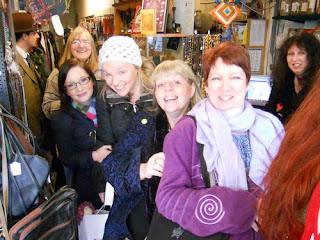 It was great to see so many lovely, smiley faces! 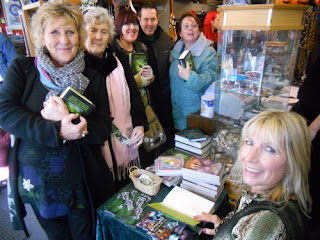 Time flew by, and before we knew it, all the copies of Shaman had sold out!  It was a shame having to disappoint people who came dashing in (also held up in the traffic).  Members of our Stonewylde network site had organised an impromptu get-together across the road in the old George and Pilgrim Inn, so we packed up and headed off across the road.

It was so good to see so many Stonewylde friends.  I knew none of these people before I wrote the books, but I count them as my friends now.  We were given the use of a room to ourselves, which was great, and there was a lot of hugging and catching up.  There have been several smaller meet-ups since the big Moongazy Camp last May, but because we’re spread so far geographically, it’s always good to get an opportunity like this to see each other. 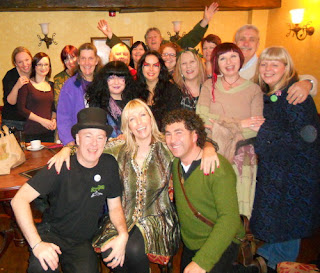 Many of us were staying the night in Glastonbury and attending the Avalon Faerie Ball that evening.  So we reluctantly said goodbye to those who weren’t, and went to get ourselves ready for the ball. 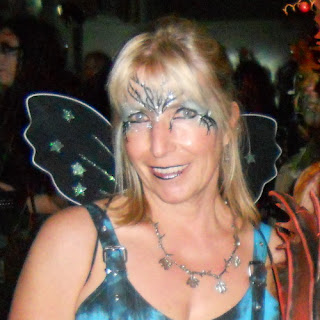 Unfortunately faeries must have a big thirst on them, because it wasn’t that long before the bar at the Faerie Ball was drunk dry! There were several acts, and the one we enjoyed the most was an amazing couple called the Gypsy Pyksy, performing a dance which I think was called Ur Tre.  It involved a girl, covered in mud and her clothes in rags, being engulfed by a tree. It was really spine-chilling and creepy, and I had a nightmare about it later that night! The very talented Dorset band The Dolmen were headlining, and once they came on, they immediately had everyone dancing.  It was all great fun and we thoroughly enjoyed ourselves.   But now … back to reality.  Although some of that glitter just won’t scrub off!