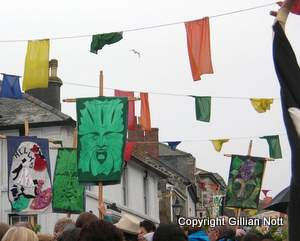 Our Guest Blogger today is Gillian Nott, a Cornishwoman and key member of the Guild of Strawcraftsmen. Gillian is a staunch and very early member of our Stonewylde Community, and she’s contributed hugely to bringing Stonewylde to the attention of the world. We’ll be hearing more (I hope!) from Gillian in future blogs, but for now, here is her wonderful account of the Helston Furry Day and Hal-an-Tow.

I?m not a morning person, and definitely not one to relish leaving the house at sparrow ***t (that was meant to be sparrow tweet!). However, Helston is the best part of an hour?s drive away from us, so it was a really early start on Saturday. Furry Day is normally held on 8th May, unless that should happen to fall on a Sunday, which it did this year ? then by tradition it is held on the previous day, Saturday 7th. And as anyone knows, who has made this trip before, the town of Helston closes at 6.00 am. Trying to find somewhere/anywhere to park can be an interesting experience. We left in thick sea fog, which didn?t augur too well for the day, but by the time we were nearly there, the fog had thinned to a light but persistent mizzle ? very fine rain which you don?t really notice, but it doesn?t ?arf make you wet! Helston?s celebrations are twofold, in that it has two main attractions: the Hal-an-Tow, and the well known and much loved Furry (Flora) Dances. We gave the early (7.00 am) dance a miss, but were in good time to see an early performance of Hal-an-Tow.

What on earth is Hal-an-Tow? Basically it?s a boisterous ?mystery? play with a plethora of assorted characters, ranging from St George and the Dragon, Robin Hood and Little John, rather a large number of Green Men, a Master of Ceremonies who tells all (in Cornish!), a multitude of er, Spanish sailors? a fair number of damsels in floaty blue dresses and other females highly decorated with sycamore branches and, not least of all, the Archangel St Michael, Helston?s Patron Saint. Oh, and one shouldn?t forget Aunt Mary Moses (don?t ask!). 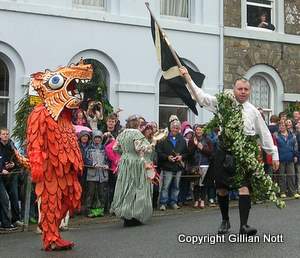 Even St Piran made an appearance, complete with the millstone upon which he floated to Cornish shores (as one does). Confused? Well, so are a lot of the audience, but nevertheless it?s a great spectacle, with loads of noise and shouting, singing and dancing, beating of drums and blowing of whistles to celebrate the arrival of Spring and the end of Winter.

This motley crew will perform at seven different spots around the town, finishing at 9.15 am in front of the Guildhall, and then no doubt set in for a serious amount of revelry and drinking for the rest of the day. This was the principal reason why it fell out of favour in Victorian times, being associated with drunkenness and wild behaviour! In the meantime, the Furry/Flora/Faddy dances are also taking place. 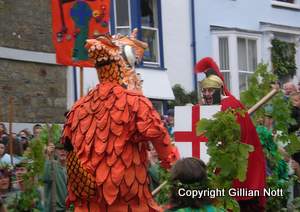 The Furry dance is a processional dance, which probably originally took place on May Day, before being adopted by Christian tradition and thus celebrated on 8th May, the date of the Feast of the Apparition of St Michael the Archangel (though the Town Band do have a ?rehearsal? in the early morning and evening of May 1st, with a group of volunteer dancers). It is certainly pre-Christian, with its origins in the pagan rites of Spring and fertility.

The First Dance was originally for the servants and the working classes, hence the early start. The Children?s Dance commences just before 10.00 am and, although introduced much later (1922) is one of the most popular features of the day. The Midday Dance is the most formal of all, leaving the Guildhall precisely as the Town Clock starts to chime. The men wear top hats and morning suits, the women elegant long dresses. The leading couple has to be born in Helston, and the other participants take part in the dance by invitation. Anyone can join in the final dance of the day, the Evening Dance. But be warned, stamina is needed, for the whole dance around the town, in and out (literally!) some of the houses and shops, up and down the hills and through the gardens can take a couple of hours, even with a break half way through.

For me, after the Hal-an-Tow performances, the great joy was to see the children dancing ? and there are hundreds of them, from the four schools in Helston ? all dressed in white, 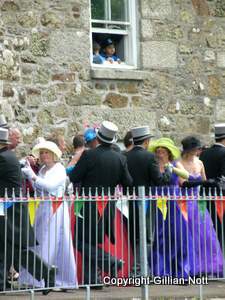 the boys with lilies-of-the-valley pinned to their shirts, the girls with special floral arrangements in their hair representing each of the schools. Their young legs must be fair worn out after all that one-two-three-and-hop (and please don?t anyone mention Terry Wogan!). By mid-day, the damp had cleared and the sun came out. Time to wander around the stalls, pick up something to eat, have a pint, then head for the Bowling Club.

This was the last circuit for all the dances, and we were fortunate to be able to sit outside the clubhouse and watch the Midday Dance participants in their finery dance all the way round the green before they exited under the Monument arch to finish up at the Guildhall. Then, for us, it was time to head home (doves and ducks and husband to feed), but Helston was still going strong, and no doubt would continue to do so until the wee small hours. What an astonishing day, from the thick Cornish mist of the morning to the incipient sunburn in the afternoon, and the amazing sights and sounds of Helston celebrating the triumph of Light over Darkness, Life over Death, Spring over Winter in these centuries-old ceremonies and traditions.

And for to fetch the Summer home

The Summer and the May, O,

For Summer is a-come, O,

Many thanks to Gillian for this lovely blog and the use of her photographs (please do not copy without permission). This has made me determined to visit Helston myself next year – and take part in the Evening Dance too!

Finally, I’d like to mention one of my favourite pagan musicians, Damh the Bard, who’s currently touring Australia. He has a great version of the old folksong Hal-an-Tow – take a look here.