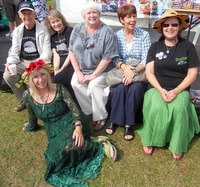 Having only just returned from the Avebury Book Launch, Mr B and I then embarked on a mini book-tour of the South West. In three days we attended five events and had a brilliant time. We went to the Paignton Children’s Festival and signed books for Torbay Books, the famous shop owned by Matthew and Sarah Clarke. It was lovely to see some very special Stonewylders at this event, but we soon had to leave to dash right across Dartmoor to the north to the Walter Henry’s Bookshop in Bideford. Again we were delighted to see some familiar faces who’d turned up specially, and meet new readers too.

We spent the night in a beautiful hotel in the middle of Dartmoor, but next morning were greeted with almost torrential rain as we drove to Plymouth’s New George St Waterstone’s branch. A whole crowd of Stonewylders awaited us and we spent a fantastic morning there, selling many copies of all four books.

The afternoon saw us in Tavistock, at Book Stop, which was lovely.

After a great evening in Fowey eating fish and chips and just missing the firework display, we drove down into Cornwall to be greeted by Cornmother and a celebration bottle of bubbly! Sunday morning saw us in

Truro Waterstone’s, where more fans turned up to support us and several new readers discovered Stonewylde. Then we made the long trip home feeling all in a daze after so many people and places. Many thanks to the five shops who hosted us and all the fans who turned up to say hello and get their books signed. More photos will be on the blog.